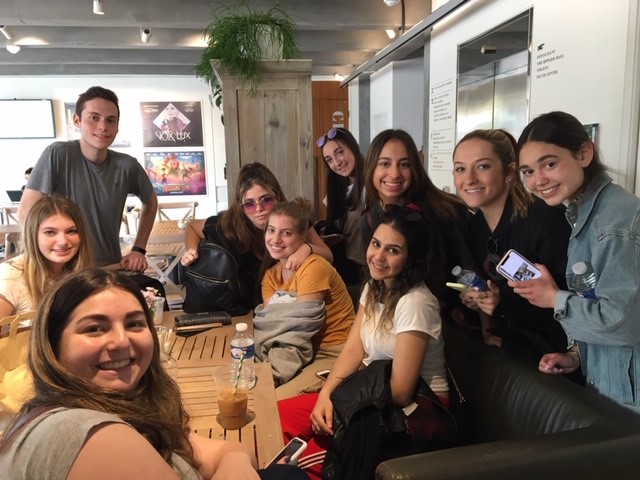 In an alternative educational experience designed to open students' eyes to a new culture and create a bond of shared experience, 12 juniors, Dr. Jon Jucovy, and I embarked on a three-day trip to London.

The trip began with my desire to visit the Jewish Museum of London's new exhibit, "Jews, Myth and Money," an exploration of the history of anti-Semitism through ancient paintings and texts, as well as modern renditions of anti-Semitic tropes. Dr. Jucovy began our visit with a brief introduction to the ideas and images students would confront, and we adopted a slow stroll through the galleries. The juniors agreed that the exhibit was both edifying and disturbing, as they struggled with the prevalence of negative stereotypes and revisionist history.

Our first day began with lunch at JW3, the modern Jewish community center in Hampstead. JW3 houses a dairy cafe, Zest, and an upscale meat restaurant; we had two of our meals at Zest, and the food was light and fresh. We traveled next to the Churchill War Rooms, where we met Dr. Jucovy's friend, Dr. Alan Sked, a professor of history at the London School of Economics. He toured the War Rooms with us, and both history teachers provided information and context for the students, who were able to view the actual living quarters and conference rooms of Churchill and his war team. It was an uncharacteristically sunny day in London, and after two hours, we were glad to exit the claustrophobia of those bunkers.

We landed at Green Park across from the War Rooms and Dr. Sked presented an analysis of his pro-Brexit position as students relaxed, absorbing his ideas and a bit of sun. That evening, we attended a performance of Toast, a comedy based on the memoir of the British chef, Nigel Slater. At "The Other Palace" venue, students got their first taste of British humor; after the show, we discussed how American humor and that of the Brits were often quite different. Sharing a common language, our two countries do not necessarily share attitudes and sensibilities.

On our second day, we spent the morning at the Jewish Museum of London, and afterwards, to their great delight, students had several hours of free time. They divided into small groups and made arrangements to visit the London Eye, the British Museum, and other sights. At 5:00, we reunited at Tish, a new dairy-free kosher restaurant with creative dishes such as truffle fries, gentleman's schnitzel and chocolate and passion fruit fondant. The weather was perfect, and we sat outside, ate, and celebrated two student birthdays. Our evening began at The Globe Theater, where we saw a raucous, hilarious version of The Merry Wives of Windsor. The physical comedy and ridiculous plot reversals were easy to follow; Shakespeare can be very accessible when the play is watched rather than read. Exhausted as we were, we took the tube to Soho and got late-night snacks of gelato, finally making the subway journey back to our hotel in Hampstead and on to Gatwick Airport.

Our trip was a whirlwind of sights, sounds and information. We bonded through our intellectual curiosity, openness to new ideas and an appreciation of knowledge gained through experience--direct exposure to art and artifacts, and of course, long walks through the city streets. We returned exhausted, but fueled with the energy of active learning and by the jokes and anecdotes we had gathered along the way. It was a taste of London, through all the senses.